How are waves formed?
Waves are formed through a combination of wind strength, wind duration and fetch. Wind strength is how fast the wind blows across the surface of the ocean. Wind duration is how long it blows without interruption. And fetch is the distance wind blows across the surface without disruption from obstacles. As wind blows across the water’s surface friction occurs and energy is transferred from wind to water. The result is a rising crest that forms into a wave. Over time and distance, sustained wind strength and duration build up a large amount of energy beneath the ocean’s surface, forming deeper waves known as swells. This energy fuels a swell so it can travel thousands of miles without changes in height or shape.

Water movement
In perfect waves the water molecules make a circular movement. The circle diameter will reduce with the depth. The larger the diameter of the circle, the more energy.

Energy density
The energy of waves is given in kW per meter wave front. In the North Sea these values range between a yearly average of 5 and 25 kW/m depending on the location. Near shore the values are less than further offshore. Ocean waves in off shore regions around the world can easily reach values in the 50-75 kW/m range. 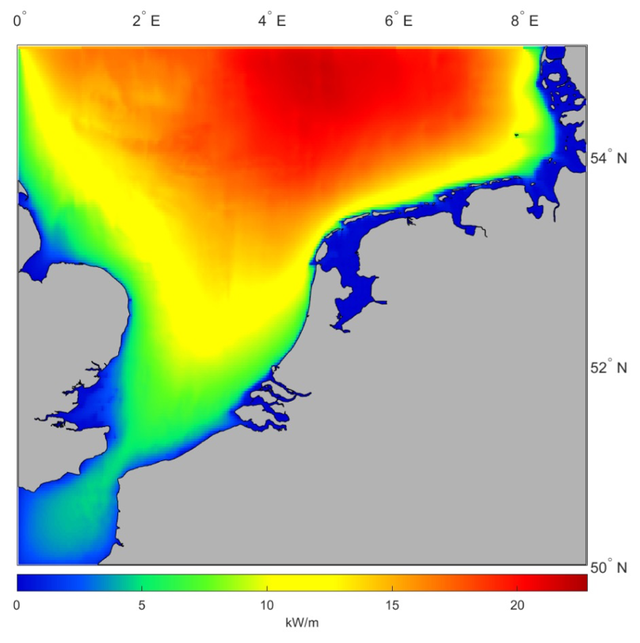 Irregular wave climate
In seas like the North Sea, waves are often made up out of a combination of different waves from different directions, leading to a wave regime of smaller and bigger waves. The converter will be more efficient if it is capable of generating power from the big waves as well the smaller waves. Ocean waves will show more consistency.